The Galleria 10 is a guest friendly hotel in the Sukhumvit section of Bangkok Thailand. The hotel is large and easy to find, just down Soi 10 from Sukhumvit on the left hand side. The place is big and well indicated so there should be no trouble locating it for anyone from seasoned taxi drivers to tourist newbies.

The best thing going for the Galleria 10 is its location. The hotel is situated midway between the infamous Nana and Soi Cowboy red light entertainment districts and only steps away from the Nana BTS station. It would be very easy to bring a friend back from Nana or Soi Cowboy on foot within a few minutes. The hotel is also located close to countless shopping, dining, drinking and massage establishments. 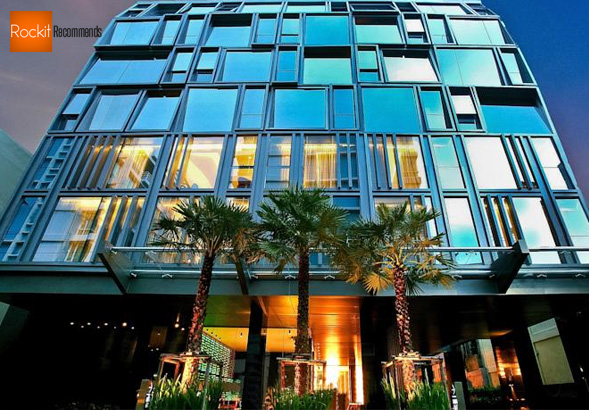 The Galleria 10 is supposedly newly remodeled. You can tell that they tried to update the place by the layout and red and black color scheme. They’ve also tried to “theme” the hotel and its rooms with sharp skylines painted on the walls. In reality though the hotel looks a little run down for a place that was just redone. While it’s certainly not a dump it’s not great either. There are signs of wear and even some leakage in the bathrooms. This isn’t the end of the world but considering what they are trying to do it’s worth noting. There is a decent pool at the hotel for those who like that.

It’s clear to me that the management of Galleria 10 is really aiming at some kind of “young hip urban traveler” demographic that they’ve dreamed up. The hotel lobby contains a large modern restaurant (that is usually vacant but occasionally visited by people not staying at the hotel) and a tour guide booth pushing the latest in guided go-rounds. What they seem to get in reality is a mix of single male travelers and small groups of people from Asian countries. To their credit they are totally guest friendly though that is probably more of a result of economic necessity than anything else.

Thailand is famously known as the land of smiles. I didn’t get much of that at Galleria 10. In fact the only signs of life I got at all were warm hellos from the maids and a single hello from a fellow opening the front door once. No one at the front desk as much as lifted their head to look at me when I entered or exited the elevators. There were no smiles during check in or check out either. Again this isn’t the end of the world but it is something to mention.

Hotels like Galleria 10 certainly have their place. They offer reasonable quarters in good locations and welcome the temporary guests of guests with little hassle. While I wouldn’t go out of my way to stay at the Galleria hotel again I wouldn’t avoid it either. If the rate was right I could certainly spend another night or two in one of their rooms.

From everything I’ve seen I get the impression that showing up at the front desk and asking for a room would result in paying a much higher price than is deserved. As always the safest bet would be to book your room at the Galleria 10 online and get a discounted rate.