Casa Real is an incredibly nice three star hotel located in the upscale 93 Park area of Bogota, Colombia. As the name of area would suggest it is located near 93 Park (or Parque de la calle 93 in Spanish) which is without question the safest and most upscale section of Bogota.

The Parque 93 area is also home to a lot of the city’s nightlife including clubs and bars aplenty. In addition, a lot of people hang in and around the park itself all day and night. There are also a lot of restaurants and cafes around the park that range from low end eateries like Subway to steak houses serving up delicious meals. 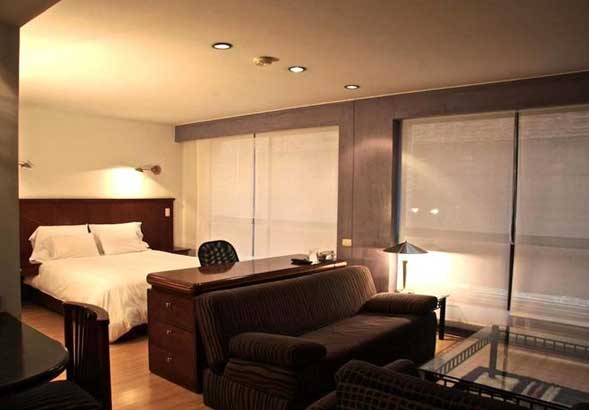 Casa Real is an excellent hotel. It is easy to find at on Calle 93A but it doesn’t look like a hotel from the outside. With a red brick exterior it looks more like an apartment block. Inside there is a front desk to the right and a large restaurant area to the left. Further ahead there is an elevator and a spiral staircase. The place is designed really well with natural light flooding in and the staff is kind and courteous. The hotel also has one of the best breakfast spreads of any hotel I’ve seen. The place probably deserves more than the three star rating it has been given.

Rooms at Case Real are large and modern with big beds and plush bedding. They also have large bathrooms with a seemingly limitless supply of hot water, desks to work on, high speed WiFi, flat screen televisions and safes. There is nothing to complain about at all.

Casa Real is a guest friendly hotel with a staff that for the most part minds their own business. At most a customer may be requested to sign a guest in to a log book before bringing them to their room which is no real hassle at all.

Generally speaking Bogota is a relatively inexpensive place but hotels around 93 Park can cost more than others. That’s especially true if you walk in and ask for a room on the spot. It is much cheaper to book a room online before arriving.