This website published a list of the best guest friendly hotels in Phnom Penh in early 2015. That list didn’t include the InterContinental Phnom Penh Hotel but perhaps it should have.

The InterContinental Phnom Penh Hotel is a five star hotel located on the corner of Monireth and Mao Tse Toung Boulevards which are two major thoroughfares. This puts it near the Olympic Stadium and the Russian Friendship Hospital. This area is filled with markets and regular stores of all types but is not in the immediate area of most nightlife and entertainment.

The part of town the IC calls home isn’t bad though. There is plenty around and it is an easy trip to the international airport or the local bus station. Plenty of motodops and tuk tuks are on hand to take people from the hotel to the riverside or other nightlife hotspots for a few dollars at any time of day or night though those who spend the money to stay in a five star hotel are probably more likely to take a metered taxi or hire a car and driver.

Those too tired or lackadaisical to venture far afield will be pleased to find that there is a very fine restaurant inside the hotel that serves up some delicious food. The prices are higher than what street vendors and more local oriented places charge of course but the quality is generally much better too. There is a time and a place for everything. For those finding them selves in a time when they have aches in many places there is a massage center located right inside of the hotel. The female masseuses who work in the massage center will also perform massages in the privacy of customer hotel rooms upon request which often results in a happier experience.

Of course has all the usual features one would expect from a place with a five star rating as well. There is a gym filled with working equipment along with a nice outdoor swimming pool. There is a bar next to the pool and free wifi throughout the hotel. The InterContinental also has a business center, meeting rooms and its own coffee shop on premise.

The most unique thing about the InterContinental hotel is its exterior. While it may appear to be like any other large hotel from afar getting closer reviews a large archway designed in the local architecture style which really stands out. The rooms inside are very nice and spacious. There are some signs of wear here and there which would take away from a five star rating in many more developed countries but in Cambodia this is about as good as it gets for the moment. There are no major glaring problems in any event and the hotel remains sound. 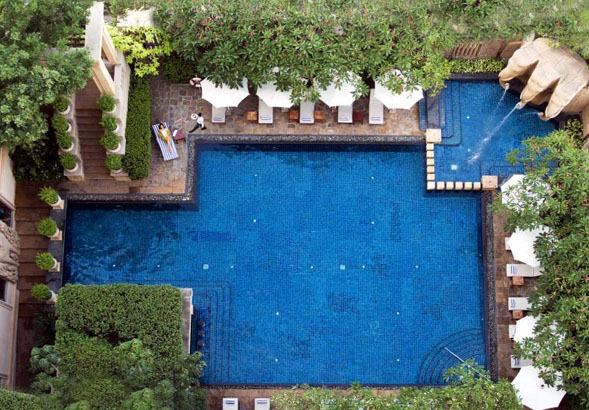 The InterContinental Phnom Penh has a very large staff. Numbers of very lovely ladies handle a lot of the business including dealings with customers and local gentlemen often dressed in strapping uniforms and pith helmets do the rest. Most of the people working at the hotel can speak at least some English. More than a few can speak quite a bit. All workers are warm and friendly and willing to help in any way that they can.

That’s not to say that the staff follows every move of all the people staying in the hotel. The sheers numbers probably wouldn’t allow that but there’s no attempt at such a thing in any event. There is respect given to the privacy of guests and those who decide they’d like to bring people back to their rooms seem to have no problem doing so. There is plenty of security on hand if a problem breaks out but in this place that rarely appears to happen.

Since the hotel is so highly rated you would expect that rooms would be on the expensive side. And you would be right. Regular prices for those who show up at the last minute can start at a whopping $500 US dollars per night. Those with the foresight to book online in advance can stay in the same rooms for $200 US dollars a night or less depending on the time. This may seem expensive for the area but it is a much lower price than many other five star hotels around the world charge.