The Hotel Dynasty is a well known two star hotel in the now famous Gangnam section of Seoul. The hotel is large and prominent despite its relatively low rating. In fact the rooms inside aren’t bad at all and in a lot of places like Pattaya this same hotel would probably get three stars, if not more.

The Dynasty is very conveniently located along a main thoroughfare in Gangnam. It is surrounded by all sorts of things including convenience stores, coffee shops, shopping outlets, massage centers and more. It is just a five minute walk from Sinnonhyeon Station. It’s not much further from Gangnam Station. The architecturally significant Kyobo Tower is also very nearby. 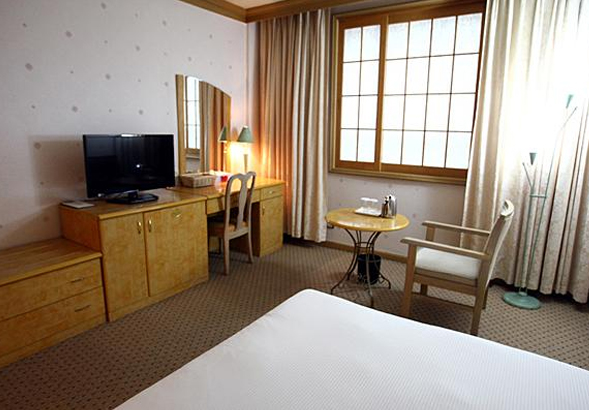 Despite it’s location in an area with a lot of business and commerce taking place the feel at the Hotel Dynasty is very laid back. That’s not to say that the staff is inattentive. It’s simply a comment on the atmosphere.

English education is widespread in South Korea but it can still be tough to find any real English speakers who are willing to get through a conversation. There are people at the Hotel Dynasty who can speak English well enough to get through the check in and check out processes with ease. A few can speak well enough to talk about all sorts of things.

As mentioned, the rooms at the Hotel Dynasty aren’t bad at all. Anyone who has stayed in a mid-range business hotel in Japan will know what to expect. The rooms here are similarly appointed though much larger than their counterparts in Tokyo.

Rooms at the hotel are incredibly inexpensive considering its central location in the most famous part of the capital city of South Korea. Great deals can be had by booking a stay at the Hotel Dynasty online before arrival.