The Golden Sand Hotel is an economically priced hotel in Cambodia’s beach town of Sihanoukville that provides most of what the single male traveler needs. I’m not sure how old the hotel is but it has been kept up pretty well in the meantime. It’s not the best hotel in the world or even the city but it does have a lot going for it

While the Golden Sand was clearly designed with ideas of grandeur it does show some flaws and general signs of wear and tear. For example the windows are a little thin and during the occasional storm that sweeps in off the beach they can make some creaking sounds. Other little things like lose toilet flushes can also be expected. Most of this is manageable though.

There is only one elevator and at times it can take a little longer than it seems it should to show up but this isn’t too big of a deal because the entire building is only four stories high. The wi-fi has a strong signal throughout the building which isn’t always easy to find but at times the connection can be a little slow. There is a mediocre restaurant inside the hotel along with a mediocre cafe overlooking the pool that takes up half of an otherwise empty building.

On the plus side the large pool is very nice, well kept and clean and there are people on staff to provider swimmers with towels and look after things like phones if required. The rooms are decent for the price with refrigerators, mid range beds and flat screen televisions that carry a lot of international channels. The hotel is only a short walk from the popular Serendipity and Ochheuteal Beach, the bar complex next to the well known Golden Lions roundabout and the large Pharaoh KTV complex. It is also in walking distance of some restaurants and there are always tuk tuks on standby just outside the hotel for trips out of foot range. As an added bonus there is an ANZ ATM right on the premises.

The staff isn’t the most attentive in the world but they do their job and provide help when it is requested. Their straight ahead attitude is probably one of the reasons no one seems to mind or even notice when a guest returns to his room with a new friend or two in tow. 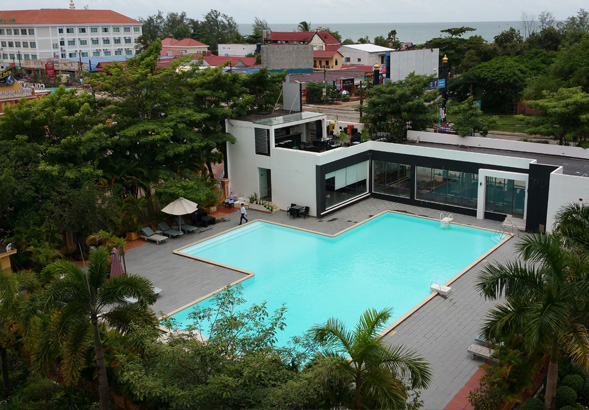 While there are some nicks and scratches around the hotel it is overall acceptable considering the reasonable prices the place charges and the surrounding area which isn’t exactly the French Riviera. There are some luxury options in town too and I will do my best to review them in the future.

Rooms at the hotel are usually priced very fairly though I have seen them shoot up at popular times or when customers show up at the last minute and try to check in. The only way to ensure the best possible rate is to book a stay at the Golden Sand online before arriving there.