The Sokha Beach Resort not to be confused with the giant new hotel with a similar name in Phnom Penh is considered one of the best hotels in the seaside town of Sihanoukville, Cambodia. As I remarked in a recent review on a much cheaper hotel in the same town however, Sihanoukville “isn’t exactly the French Riviera.”

The Sohka Beach Resort is rated five stars and prices rooms in accordance with that classification. While it is certainly up to size and specs as a luxury resort it can’t really compete with five star hotels in some other major destinations around the world and even in the region. Still the hotel does provide a relaxing atmosphere that includes access to a large swimming pool and a private beach.

Check in is done in a large open lobby. It seems to take more time than it does at some other hotels which is probably due to the presence of large Chinese group tours and the sheer size of the place but thankfully there are lots of places for customers to hang around if they show up early or run into other delays. The large pool which features a swim up bar is right next to the lobby and the beach is only a short walk further.

The beach is one of the best in Sihanoukville. Unlike the more popular public beaches it has soft white sand and is devoid of beach hawkers and shanties selling all sorts of food and drink. Instead there is a small bar on the beach where food and drink can be ordered from the hotel. Of course this costs a little more but those who value peace would probably find it an acceptable trade off.

Obviously he beach isn’t as nice in the rainy season. The water turns a dark green and lots of waves are present. In the dry season however the water is crystal clear and the staff pays close attention to keeping the hundreds of chairs and bungalows made freely available to customers clean. The two pools are good pretty much year round and great for a dip. Good looking women from Europe, China and occasionally the US or a local city show up in them with some regularity even in the off season. There are also things like a gym and a shop on the premises that can come in handy.

There are always tuk tuks stationed outside of the hotel to take customers into town though this short ride can be a little pricey. A lot of people come as part of organized packages and others rent a motor bike in town or get a car and driver for the day. If you’re going to spend money to stay at a nice resort it makes sense to spend money on transportation if you need it. It’s also totally feasible to stay in the resort full time if relaxation is the only goal as there are two restaurants, room service and even occasional dancing shows that are quite nice. 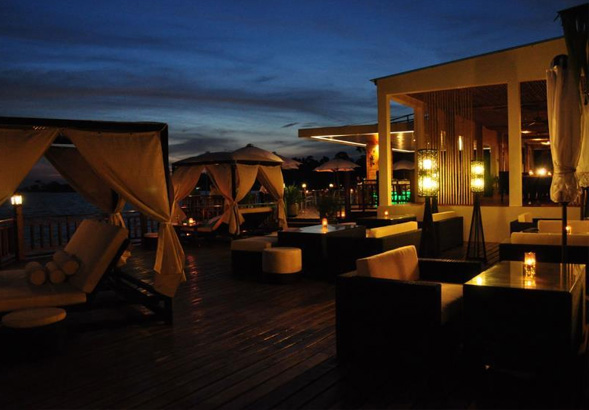 The rooms are the Sokha Resort are large and spacious with full bathrooms. Some rooms have separate bath tubs and showers. They all include the essentials which is a relief since some hotels seem to skimp out on those sorts of things nowadays. The best rooms face the pool or the beach. There is a complex of rooms near a lagoon in the far back of the resort. The are often cheaper than the other rooms even though they appear larger but this is probably because getting to them requires a bit of a walk.

The hotel does have free wifi throughout but I found it to be dreadfully slow and sometimes totally out of order. Sadly this is a problem at a lot of hotels around the world. Of note to single travelers the open nature of the hotel lobby means that guests can pretty much come and go as they please without turning a single head. It is even possible to walk all the way to the elevators without seeing a single person at night. That is of course unless one decides to stop off at the on site casino.

The rainy season is the best time to get deals at the Beach Resort. In off months rooms can often be found for 100 US dollars or less. In the dry season the rates can double or increase four times to more than 400 dollars during popular periods. The only real way to insure against that is to book a stay at the Sokha Beach Resort online well in advance of a trip.