The City Inn Vientiane is one of the best hotels for foreigners staying in the capital city of the Lao People’s Democratic Republic. The place is easy to find in the heart of the city and it’s known by every taxi and tuk tuk driver around. Check in is a breeze with a staff that works well and knows what customer service really means.

The hotel is large and well built and the staff does a very good job of keeping the place clean. The rooms are incredibly spacious. The facilities are very good, the area is quiet and everything is up-to-date. The entire building is also covered by reliable high-speed internet which is nice to see in this day and age. 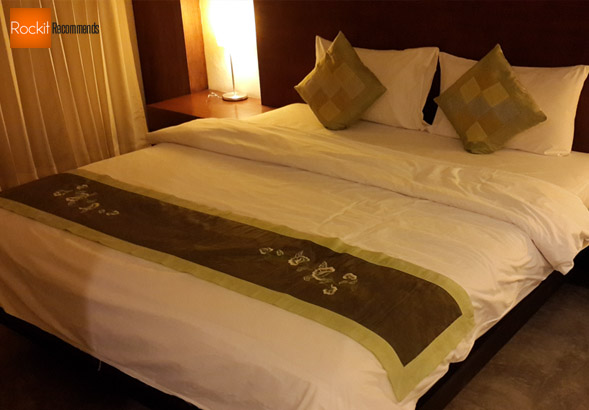 Many of the more well known parts of Vientiane are within easy walking distance of the hotel and those that are a bit further can be reached by tuk tuk or taxi. There are always a lot of taxi drivers on the corner of the street just outside the hotel’s entrance which makes getting a cab as easy as it can get.

According to numerous reports around the internet the law of Laos officially prohibits Laotian citizens from sleeping in the same room as any foreigner they are not married to. There are even some reports of foreigners being hit with fines for violating this law. Most of the reports are quite old however and there aren’t any confirmed reports of this happening in the last several years that I know of.

Nowadays its common to see foreigners and locals going around together, often into residences and hotels. The management at City Inn doesn’t seem to get in the way of that as people are free to come and go through the entrance and into the nearby elevators without talking to anyone on staff. Obviously I don’t recommend that anyone break any law anywhere. I am simply passing on information.

Customers may run into another foreigner at any one of the local nightspots and bring them back to the room to keep the fun going after the bars and clubs close up shop. This isn’t in violation of any laws and it’s perfectly acceptable at the City Inn. People of all countries are represented.

While there are some inexpensive lodging options in Vientiane many hotels charge quite a lot. Many cannot be booked online requiring visitors to run around the hot city trying to find a place to stay. The best option in my opinion is to book a room at City Inn Vientiane in advance. This also guarantees the best possible price.