The Hotel Windsor Suites in the Sukhumvit section of Bangkok is an older four star hotel close to the nightlife of Nana Entertainment Plaza and Soi Cowboy.

The hotel has a four star rating. That was probably deserved at some point, but nowadays the place is starting to show its age. It’s not a terrible place by any means, but it’s hardly up to the standards of the some of the amazing new four star hotels going up around the world.

Despite being within walking distance of the aforementioned Nana and Soi Cowboy redlight districts, not to mention hundreds of other massage parlors, pick up bars and other such entertainment venues, the Hotel Windsor Suites is decidedly not guest friendly.

Guests of the hotel who wish to bring another person back to their room will have to pay a whopping 1000 Baht ($30 USD). This is not a one time fee, it applies to any and all persons brought to the room through the duration of the stay.

The joiner fee is compounded by the quality of the front desk staff, which leaves a lot to be desired to say the very least. When just checking in can take as long an forty-five minutes, you can imagine what kind of fun paying a joiner fee for a new friend at 1 AM is like.

Inside the Hotel Windsor is nice enough. As I said you can tell that it has been around for a while, but everything was done well originally and for the most part has held up over the years. Rooms are totally suitable for a short or long stay, and the hotel is very conveniently located right on Sukhumvit Soi 20. 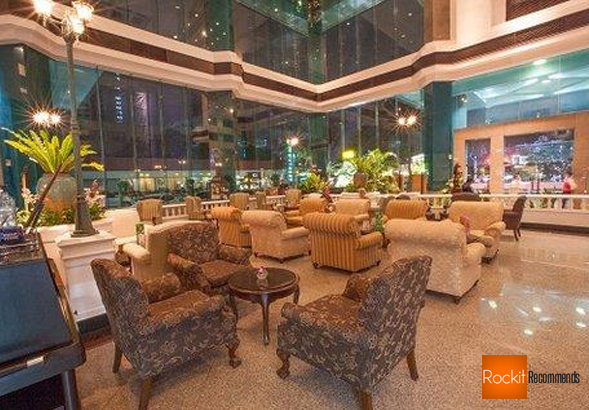 The official rate for a room at the Hotel Windsor Suites ranges between 45 and 55 US dollars, but when you shop online you can typically find a deluxe suite for even less than that. The last time I booked a room there I paid just $37 for a Deluxe Suite.

As a relatively good hotel in a convenient location with low priced rooms, the Hotel Windsor Suites is hard to beat. The biggest problem is the insane joiner fee, which can end up costing almost as much as the room itself.

Those who plan to have all of their fun outside of the hotel (and there are indeed plenty of places in the area to do so) should have no troubles with the place, outside of possible annoyances with the length of the check in process. Those who plan on meeting lots of new friends and bringing them back to their rooms however will find themselves knee deep in charges and inconveniences.

Book your stay at the Hotel Windsor Suites online to insure the best price.